The bulk of our work as a private security company is primarily hinged on the prevention of crimes, risks and threats in order to guarantee the safety of our client’s lives and properties. To effectively do this, we must always keep ourselves abreast with the dynamics of crimes in Nigeria.

The problems of crime and disorder cannot be prevented or solved without reliable information on their causes, incidence, prevalence and pattern. But where can one avail themselves with this information about crimes in Nigeria?

There are 3 major approaches to the measurement of crime in society. In other words, there are basically 3 sources of gathering crime information in Nigeria. These are;

As a forward thinking private security company, Sheriff Deputies frequently avail itself with these data in order to better equip ourselves in the delivery of our services for the protection o lives and properties of Nigerians.

In this article, we will be benchmarking on the data derived from the second source of crime information – victimization surveys. Crime victimization survey is one of the instruments for investigating the dynamics of crime in a society. Thanks to the immeasurable work of CLEEN foundation that have made this data available to Nigerians.

This statistical study of crimes in Nigeria highlights key findings of the 2013 Crime Victimization Survey using data collected from fieldwork conducted in June and July 2013. The population sample consisted of 11,518 Nigerians equally distributed among male and female adults aged 18 years and above from all the 36 States in the country and the Federal Capital Territory.

Overall, these findings are meant to assist the government, police and the entire criminal justice administration system to better understand emerging trends in crime and safety in Nigeria and consequently, to refine and deploy improved strategies to resolve the country’s current challenges of security and safety.

Fear of crime is related to levels of criminal victimization. However, it is also influenced by other factors, such as a general sense of vulnerability, age, gender, signs of physical and social decay, and inter-group conflict.

Fear of crime refers to the fear of becoming a victim of crime. The findings of the 2013 survey indicated that more than 7 out of 10 Nigerians 72% had the fear of becoming victims of crime. Across States, Ogun and Ondo State recorded the highest with 94%, while Benue and Taraba State recorded the lowest with 38%. The national average stood at 72%. Analysing by gender, 73% of females feared becoming victims of crime compared to 71% of males.

Fear of Crimes in Nigeria by States (%)

Experience comprises knowledge of or skill of something or some event gained through involvement in or exposure to that thing or event. The survey made a very clear distinction between perception and the actual experience of crimes in Nigeria.

A distinction must be made between the perception, and the actual experience, of crime. In the dataset, as much as a quarter of respondents, that is 25%, said that they had been victims of crime during the past year. The findings showed a progressive decrease in the number of victims of crimes in Nigeria.

There has been a 6% decrease in actual experience of crime from the 31% recorded in 2012 to the current 25%. The survey also indicated that the number of victims of crime was highest in Enugu State with 70%, followed by Ekiti and Ebonyi State (both 65%). The national average was 25%. Katsina State had 9%, while Ogun had the lowest score of 5%.

Analysing experience of crime by regions in Nigeria, the South East recorded highest with 44% while the North West recorded lowest score of 18%. Lagos State also recorded 18%. Further desegregation by gender indicates that more men (27%) had actual experience than women (23%).

Actual Experience of Crimes in Nigeria by state

Robbery is the crime of taking or attempting to take something of value by force or threat of force or by putting the victim in fear. At common law, robbery is defined as taking the property of another, with the intent to permanently deprive the person of that property, by means of force or fear.

The survey also revealed that security in the home remains a key challenge, as 37% of robberies occurred in the homes of respondents; another 26% occurred near the home, while 9% took place in the workplace or school.

Robbery Crimes in Nigeria by states

5% of respondents stated that they had been raped or been victims of attempted rape. The analysis according to geopolitical zones shows that the South South has the highest incidence with 10%, followed by the North East (6%). The South West and North West recorded 4% each. The North Central recorded 3% and South East had the lowest score of 1%.

The incidence of rape has been on the increase from 3% in 2011 to 5% in 2013. When victims were asked where the rape occurred, 36% said it happened near their own homes; 19% said it occurred at their homes and 13% said it occurred in the school or work place. Again the challenge of security and safety in the homes is explicitly exhibited in rape case.

A total of 3% of the respondents interviewed nationwide said that they had been victims of kidnapping or attempted kidnapping. The South West had the highest incidence of kidnapping with 5%, followed by the South East and South South with 4% each. The North West and North East each had an incidence of 3%, with the lowest being North Central at 2%. 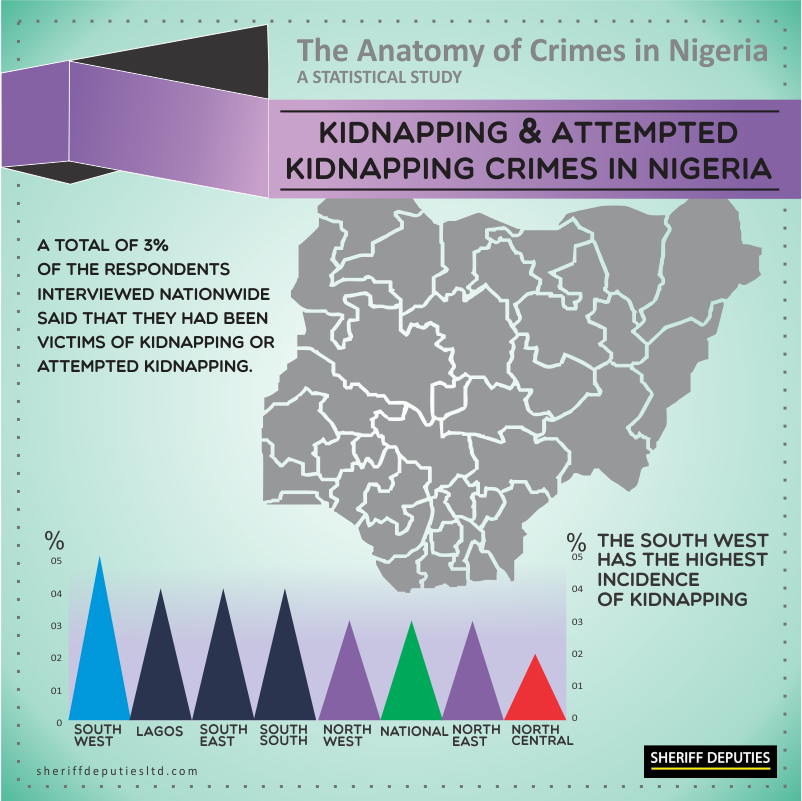 Assault is a crime that is punishable under the Nigeria criminal law. It is both a crime and a tort and, therefore, may result in either criminal and/or civil liability. Generally, the common law definition is the same in criminal and tort law. There is, however, an additional criminal law category of assault consisting of an attempted but unsuccessful battery.

The term is often confused with battery, which involves physical contact. The specific meaning of assault varies between countries, but can refer to an act that causes another to apprehend immediate and personal violence, or in the more limited sense of a threat of violence caused by an immediate show of force.

Nearly one in every three respondents (30%) admitted having been a victim of domestic violence. Over the last 3 years, there has been an increase in domestic violence. There was a progressive increment from 21% in 2011 to 31% in 2012 with a 1% decrease in the 2013 survey to 30%.

The findings of the 2013 survey revealed that domestic violence ranks amongst the top four most common victimizations in Nigeria. Prevalence is highest in the South East with 43% followed by the South West and the North East with 35% each. The South-South recorded a 26% incidence while the North Central and North West recorded the lowest with 19% each.

5% of respondents stated that they were victims of attempted murder. This indicated an increase from the 3% recorded in 2012. The highest was in the North East (8%), followed by the South South and North West with 7% each, the South West (6%), North Central (3%) and South East (2%) had the lowest incidence in this analysis.

Further analysis of the 5% who responded that they were victims of attempted murder in 2013, showed that 35% of them said that the incidents occurred at their own homes.

Over all, nearly one in every two respondents, that is 45%, reported being a victim of theft of mobile phone. Theft of mobile phones remains the number one crime committed in Nigeria. At the State level, Taraba ranks highest at 64%, followed by Kwara, Abia, Lagos, at 59%, 57%, 55% respectively, while Kaduna, Ekiti, Nasarawa and Plateau all had scores of 54% each. Lowest ranking were Ogun and Yobe with 23% and 22% respectively. 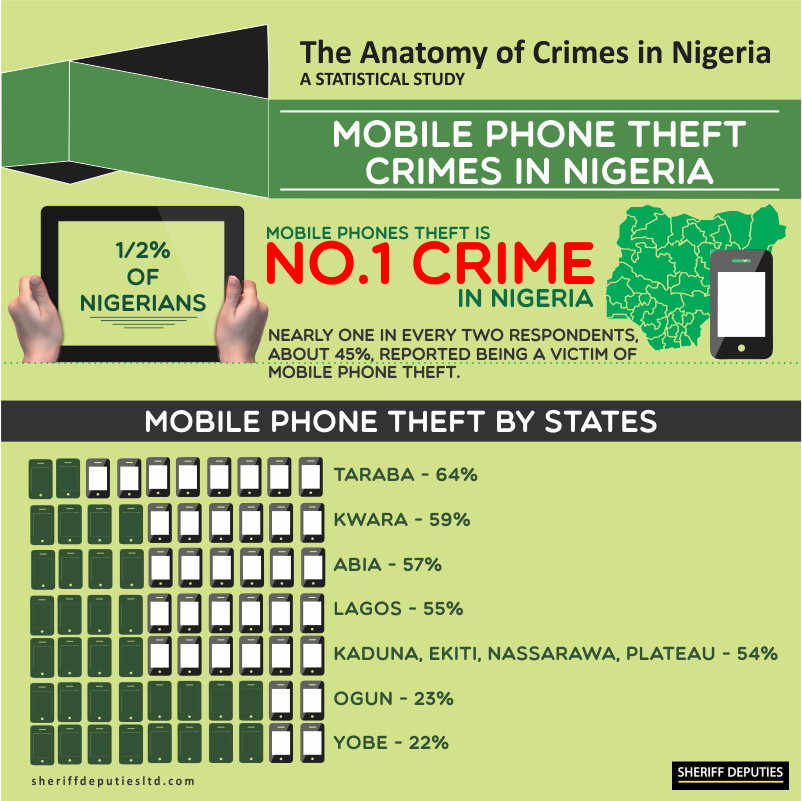 The Survey revealed that 4% of respondents have had their cars stolen in the past one year. The highest incidence of car theft occurred in the North West (6%), followed by the South South (5%). The North East and South West recorded 4% and 3% respectively, while the South East and North Central recorded 2% and 1% respectively. 35% of cars were stolen in victims’ homes, 34% near victims’ homes, 19% elsewhere and 12% at their work place or school.

Armed violence entails the use of weapons and physical force to inflict, or attempt to inflict injuries on another. The results of the survey indicated that 4% of respondents were victims of armed violence. The highest incidence was in the North East with 11%, followed by the South South with 9%. For the other regions, the North Central and North West recorded 3% while the South West and South East recorded 1%.

Crime Reporting to Police by State