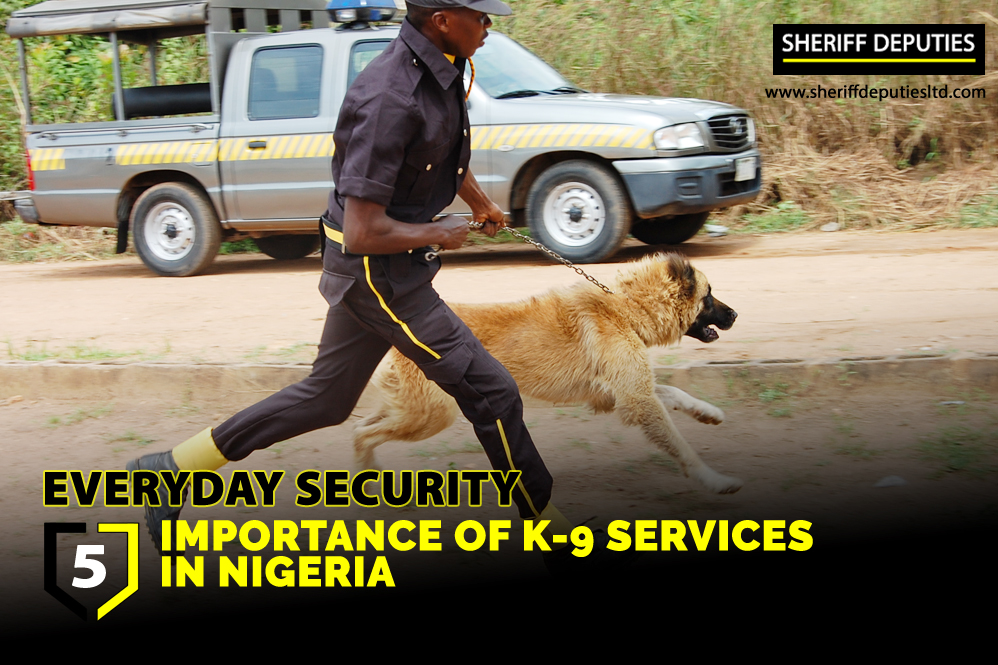 At first glance, the importance of K-9 services in Nigeria might seem strange to a layman who doesn’t know the meaning of K-9. But to the police or other security professionals, K-9 wouldn’t be so strange. K-9 are dogs that are trained to assist the police and other security personnel in their day-to-day duties.

These ‘police dogs’ have an incredible sense of smell, some argue that they have a smell 1000 times stronger than a normal human being. These attributes have made them become a great asset for anyone who decides to add the K-9 to their security team.

These dogs are not just any kind of dog; most commonly used breeds are the German shepherd, Bloodhound and Dutch shepherd, Belgian Malinois. These are all special breed dogs with exceptional capabilities that are very useful to security professionals.

Despite the undeniable shreds of evidences about the importance of K-9 services in Nigeria, only a few Nigerians have these K9 as part of their security team. In this article, we will share with you, 5 reasons why you should add this service to your security details.

Despite the concerted efforts of the police and other security agencies on how to reduce cases of missing persons (adults and children), these cases still persist. Whether it happens as a result of negligence on the part of the parents or guardian in the case of children or due to the carelessness of adults, the truth is, it can actually happen to anyone.

In a developed country like the U.S, police dogs have been used to a large extent to help in the investigation of the police and other security agencies when a case of missing person was reported.

Getting a dog is easy, but to get a dog that has been trained by professionals might not be so easy, especially in a country like Nigeria. It might interest you to know that at Sheriff Deputies we provide the trained dogs just like we provide trained security men and women for anyone who desires a safer and secured home/office.

Items or substances which are likely to cause an explosion can also be detected by these trained dogs.

Even if someone is wearing an explosive vest, the K-9 can easily detect it, their sense of smell is that strong!

Now you see why most times, police dogs and its handlers are seen at bombed sites, they are taken there to help detect whether there is another explosive yet to be detonated. In Nigeria, the Army, Police and private security companies use it for pre-security assessment of an area or event venue.

Just to mention, Sheriff Deputies have access to trained dogs and are available for short and long term use.

If you haven’t seen a police dog at the airport, then the Airports security team is not yet complete; they are that important!

The detection of banned substances has been aided by K-9. The dogs’ ability to distinctively identify a package filled with a banned substance even though it was disguised. Through their sense of smell they can easily detect it and this is one ability that has made security personnel enjoy having the K9 and it’s handlers with them always.

For drug peddlers, the K-9 is their worst nightmare, these trained dogs can smell the drugs even it was ingested! This is a good way to reduce the use of banned substances, don’t you think so?

K-9 is all about security and providing evidence. Even if a weapon used to commit a crime is hidden in the ground, the K-9 will dig the ground and bring it out.

Most commonly used for cases of homicide in more advanced countries. Due to the ignorance of the importance of K9 in Nigeria, many crimes have gone unpunished. Unless you can get evidence of a crime is basically impossible for the police to charge a suspect to a Court of Law.

Due to the K-9s ability to run fast, they help chase down suspects targeted by police. Domestic K-9s also help to chase away criminals who might want to rob homes while the owners are not around.

Their unique barking is loud enough to alert the neighbours and the house owners. Homes where these K-9 are allowed to roam freely usually have the ‘beware of dogs’ warning sign at the entrance.

We have only mentioned a few of the importance of a K9 service; wouldn’t it be nice to have K9?

We can’t exhaust its qualities, especially when it comes to the security of lives and properties. K9 is not to eliminate the human, or technology impact on security, but to aid the effectiveness of security management.

If you are still underestimating the importance of K9, we hope the highlighted benefits have given you a different orientation.

Previous Post ELECTION SECURITY IN NIGERIA: 4 Common Security Precautions During Elections And How To Manage It
Next Post EVERYDAY SECURITY: 5 Important Tasks Done By Security Guards That Goes Unnoticed