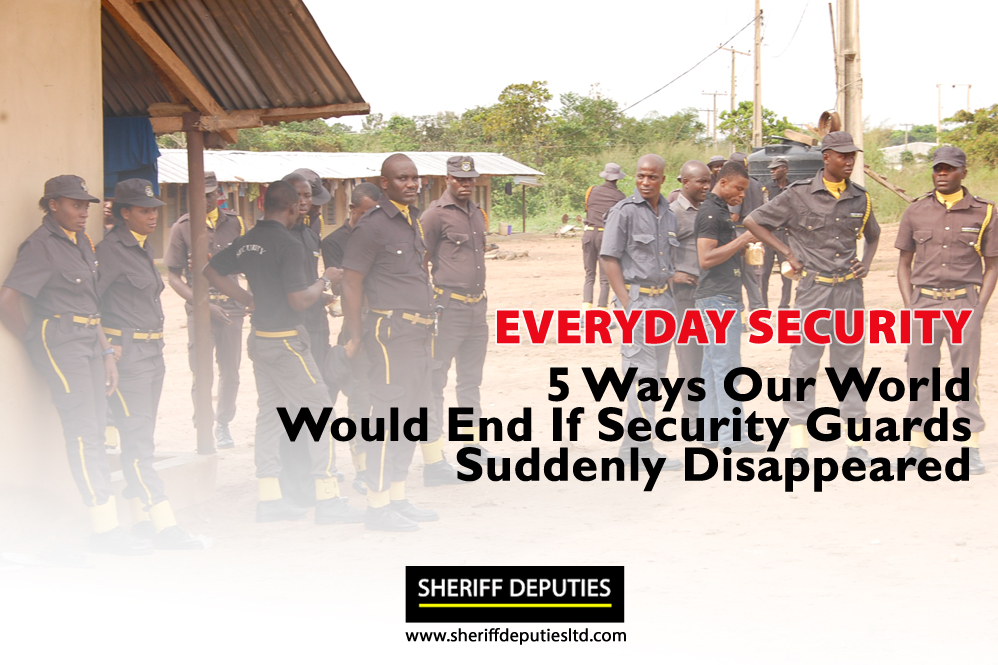 The world earned it existence millions of years ago, all we have done as humans is to exploit its resources and devise ways by which we can enjoy its fullness. A brief look at the geographical facts shows that the earth is a planet which has continents and the continent having countries of different race and cultures.

You can say every country has a story. When traveling or visiting a new country especially, one of the first set of people you will see is the security operatives. (Perhaps if you visit a country without seeing a security operative then you should know there is something terrible going wrong there).

The security operatives have been saddled with the responsibility of protection of the countries laws and ensure order. In this article, we will be sharing with you the importance of security guards to every human being in existence and why we cannot afford not to have them in the world.

5 Ways Our World Would End If Security Guards Suddenly Disappeared

Whether it’s a bank, shopping mall robbery or any form of robbery, no one wants to be a victim; it’s not an experience anyone wants to anticipate. Robbery is not something that can ever be eradicated especially in a country like Nigeria who has over 200 Million people. Due to the high incidence of robbery, many business owners have had to resort to hiring security guards to help manage the security of their business environment.

Many businesses would most likely seek the Police for protection but because for the shortage of Police officers, men and women have been trained to serve as security guards. Good to note that these security guards have made protection of life and property a more easier task for the police, as the security guard serve as the primary security contact for businesses and individual.

Even in developed countries, security guards are preferred in malls and other public places because of the kind of training they have gone through. It will be difficult for a thief to go scot-free when a criminal knows that a mall has a surveillance camera managed by a security guard(s). The impact of the security guards cannot be overemphasized. The presence of security guards would help to reduce drastically the incidence of robbery in our world.

Kidnapping involves the forceful abduction of an individual(s) and Nigeria is witnessing quite a number of high profile kidnapping. With many of the victims being the Elites in the country. Remember the case of Evans?

But today the rate has reduced due to the engagement of security guards or other security agencies. Most of the elites now have private security guards to escort them while going for public functions and guard their homes.

Kidnappers would have continued to thrive if not for the security guards. Most security companies expose their personnel to standard security procedure as it concerns kidnapping and this kind of training have been a major factor for reducing cases of kidnapping.

Though there are few cases of assassinations, most of which would have been prevented if there was a security guard on duty. Metal detectors used by these security guards have helped the anti-bomb squad of the Nigerian Army respond swiftly before the bomb is detonated. A testament to this is foiled suicide attack in the northeastern part of Nigeria.

One of the most difficult things to do is managing the behaviour of people in public gatherings. Maintaining orderliness is something professional security guards have been able to do effortlessly in our world. They have been trained on crowd control and equipped with appropriate gadgets.

Most event planners would have made plans to ensure orderliness, but in public gatherings, there will always be some individual who might want to constitute a nuisance. The presence of security guards would put these individuals to check while you enjoy your event.

Am sure you don’t want anyone to disrupt an event that has cost you so much time and money to put together. There would be chaos if we don’t have security guards helping to safeguard lives and properties during public events.

For any business owner who wants to make a profit, security should in your top 3 to-do list, little wonder top economies have the best security structure. When there is a poor security it will be difficult to manage resources whether its human resources or natural resources.

Security guards are there to help the Police and other security agencies in maintaining law and order, the Police and Military cannot deal alone with the various security challenges we have in our world today. These collaborative efforts have been known to reduce crime even in developed countries.

Please remember to drop a comment below, tell us what you think would happen if there are no security guards, we love to hear from you!

Previous Post Top 5 Social Media Accounts On Security You Should Follow to Improve your Security Consciousness
Next Post EVERYDAY SECURITY: 5 Trending Crimes In Nigeria And How To Respond