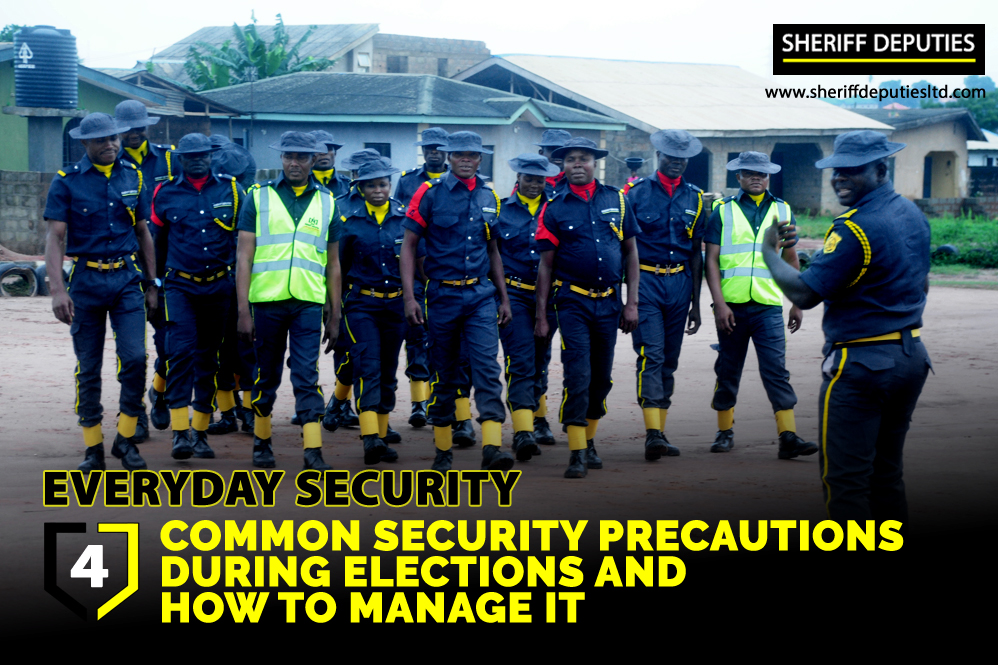 The history of Nigeria’s democracy won’t be complete without mentioning the post-election security challenges that have been experienced in time past. Reasons for these challenges are not farfetched, Nigeria has one of the most viable economies in the world, and hence the intense struggle for power, with the over-ambitious politicians doing all they can to get elected.

The inevitable results for such cases where you have desperate politicians with hundreds and thousands of supporters jostling for an office are chaos and riot, especially when one of the contestants smells defeat. Looking back at the just concluded presidential election, all of these scenarios played themselves out across the country.

ELECTION SECURITY IN NIGERIA: 4 Common Security Precautions During Elections And How To Manage It

Just as it’s our mandate to keep safe, the lives and property of people. We have taken it upon ourselves to equip Nigerians on how to be safe during elections. This article highlights the common challenges of election security in Nigeria and as usual, we proffer ways you can manage it.

A major component of the challenges of election security in Nigeria is crowd mismanagement. As expected during elections, eligible voters come out in mass to exercise their franchise.

Criminals take advantage of the chaos to steal phones, wallet/purse and you could get injured while trying to get away from the crowded area.

Respect the security officers on ground.

Maintain the queue as directed by the electoral officers and wait until it’s your turn to vote.

Vote the appropriate polling station assigned to your voters’ card.

Proper coordination and a high level of communication amongst the agencies involved.

What this means is that you should insist on having your private security company have personnel on ground to watch over your property during the election period.

In order not to disenfranchise your security guards, you and your security company can have a special arrangement that will make voting possible for them too.

The police force should recruit more people to adequately meet the security needs of Nigerians, especially during elections. If your budget can accommodate it get a 24 hours surveillance camera which you can remotely manage while away from your house to vote.

In previous articles, we have extensively written on the dangers and causes of kidnapping; however, we must also reiterate here that, assassinations and kidnapping are also common security issues we should work to prevent.

Aggrieved and desperate politicians use these to intimidate their opponents; kidnapped individuals are sold to political groups for propaganda value.

It’s however not limited to political motives. Some criminals’ motive for kidnapping may have no connection to the election; it might just be to get ransom paid by the victim in other to regain his/her freedom.

Don’t leave your home with saying a word; let your family know where you are going at least!

Get a private escort; especially if you are a major political stakeholder.

Elections can attract threats from groups whose motivations may have no connection to the national stakes of an election, has recent events in the northeast have shown, terrorists like Boko Haram and suspected herdsmen have the capacity and motivation to conduct “organised attacks” geared towards fulfilling their own propaganda agendas.

The high media coverage during the election period provides an attractive opportunity for such attacks to occur.

Report strangers in your community to relevant security agency in your area/polling centre, since you are most like going to vote where you live, you should be able to tell who is a stranger.

Don’t try to be the hero, call security personnel on ground if you suspect any strange movement, even if it’s few days to the election.

This article is not to discourage you from exercising your franchise, but to help get the right information as it concerns security.

As noted in the precautions above, crowd mismanagement, organised looting, assassination and terrorism are some of the things we should guide against for electoral security.

Please stay safe, we always look forward to getting your views on the common security challenges during elections by using the comment box below.

Contact us to get a free security risk assessment.