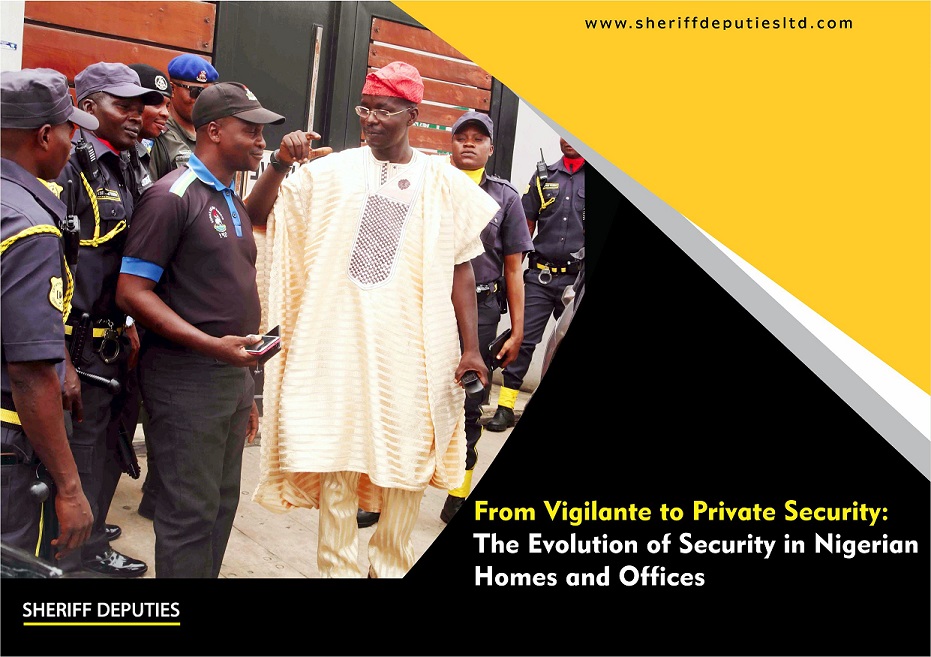 In this article, we will be looking at how private security services have influenced the safety of lives and properties. In a country like Nigeria where the police are considered the most corrupt security agency at the grassroots, most people see them as the enemy of the common man. They are called by all sorts of names that could even attract arrest if one is not careful!

Though the police have been doing a lot of sensitization to get the public to trust the police service again, everyone will remember the popular slogan of the police ‘the police is your friend’ – this was done to restore trust in the service.

Most of the lapses experienced in the police force were said to be due to lack of personnel to carter of the rapidly growing population of the country. How then can we tackle the obvious security challenges? The government asked.

From Vigilante to Private Security: The Evolution of Security in Nigerian Homes and Offices

Since the passage of the Act, security at banks, homes, public places and other corporate establishment has been better compared to what it used to be. Below are some of the effects of private security services in Nigeria.

Due to the limited number of Police officer, communities often create vigilante groups which comprise mostly of volunteers operating under a specific mandate to fight crime. This group are not licensed; rather they are founded to fight a specific cause. This form of policing was popular until some of the vigilantes’ groups became in militia/terrorists.

As a way to counter the abuse of the privilege of providing security service, the private security guard services have been deployed by many bodies through licensed security companies.

Today, every officer posted in at a client’s site have supervisors and are disciplined if found wanting in any of the company’s code of conduct.

The fact that they are security guards are closely monitored makes it less likely to turn to a terror or militia.

It is humanly impossible for the same person to have 24 hours of surveillance over your property or life, the human body is just not made for that!

Professional security guards work in shift, some are assigned for morning, afternoon or night duty, all to ensure that there is a human presence around the site. These guards engage in routine foot patrol – where they move around to check critical areas like fences, rear and front entrances. You wouldn’t get a detailed check as these when we used to have the security guards dominated by poorly trained per time vigilantes.

This will bring us to the next effect which is the use of CCTV cameras in monitoring and surveillance.

The Closed-Circuit Television fondly called CCTV has helped to reduce the crime rate. Much was not achieved by the Federal Government funded CCTV installation project in the year 2009. Lagos and Abuja were chosen for the first phase for installation, but a report has it that more than 500 of the 1200 installed CCTVs have either been vandalized or no longer functional.

Malls, Banks and other properties where the CCTV have been put to good use have enjoyed better surveillance. Much of the success of the technology is due to the insistence of private security company to include this technology as a basic need during their security risk assessment exercise.

Unlike the government installed CCTV, privately managed CCTV are better monitored and maintained. The response to emergencies has been a lot faster since the adoption of CCTV technology. Before the CCTV, security operatives had to rely on reports from spies, now you can monitor a location miles away.

At sheriff deputies, we help in the procurement, installation, maintenance and monitoring of CCTVs. With this gadget, your home and office will be a safer place to live and work respectively.

Before the private security guarding service most of the VIP escort services have been done by the mobile police, and soldiers. Very few persons had this privilege; attempt by others to protect guest/dignitaries had been hit by the limited number of security personnel for these services.

Sheriff Deputies amongst other private security company have made this service possible for anyone who wants to add a bit of class to their entry into an event or offer protection to their guests especially if they are persons of interest/VIP. We offer escort services for anyone who needs at the best price.

Private security guards have helped to reduce crime in the areas where they are deployed; having them to provide guarding service wouldn’t be a bad decision. Banks, schools, office complexes, hospitals, malls have all realized the importance of this service.

For a free security risk assessment of your facility, contact us today.

Thank you for reading through, we hope you have learnt something new. We look forward to hearing from you, use the comment box below.