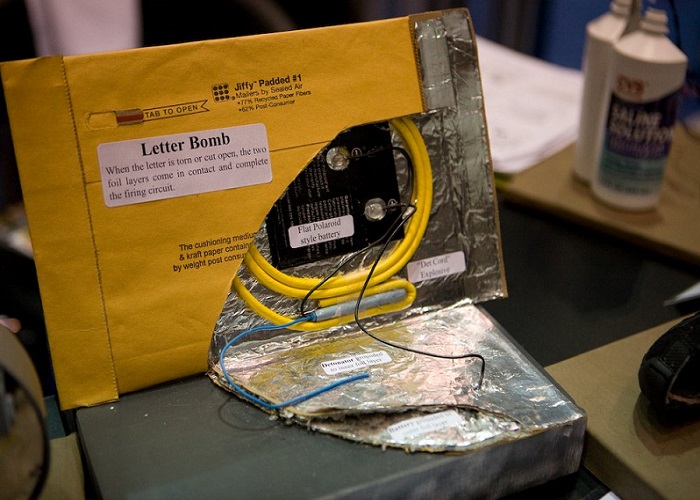 According to Wikipedia; a letter bomb, also called parcel bomb, mail bomb or post bomb, is an explosive device sent via the postal service, and designed with the intention to injure or kill the recipient when opened.

Letter and parcel bombs generally are “victim activated” meaning that a victim or intended target must activate the device by opening it. They do not normally contain timing devices.

Bombs can range from the size of a cigarette package to a large parcel. Letter and package bombs have been disguised as letters, books, candy, and figurines. Delivery methods have included mail systems, personal delivery, or placement at the recipient’s site.

Cases of Letter and Parcel Bombs in Nigeria

The first case of letter and parcel bomb in Nigeria was in 1986 used to assassinate Dele Giwa in his Lagos home on 19 October 1986.

On Dec. 22, 2009, there was another case of letter and parcel bomb in Nigeria which exploded at the Superscreen TV station premises while the culprit was carrying it into the building.

A third case of letter and parcel bomb in Nigeria was in February 2013, this time it was intercepted by the police anti-bomb squad before getting to the intended victim; the Minister of Finance, Dr Ngozi Okonjo-Iweala.

While these 3 cases of letter and parcel bombs in Nigeria might not seem like much, or significant enough to cause panic, there’s no denying the fact that letter bombs are potential weapons used by terrorists, criminals and assassins.

Let’s take a historical look to find out.

History of Letter and Parcel Bombs

Historically, parcel or letter bomb has been part of the arsenal of terrorists and mischief makers for as old as there has been a Post office.

For instance as early as the 18th century, the Danish historian Bolle Willum Luxdorph in his diary of 19 January 1764 noted that one “Colonel Poulsen residing at Børglum abbey was sent by mail a box. When he opens it, therein is to be found gunpowder and a firelock which sets fire unto it, so he became very injured.”

Again as early as 1915, Thomas R. Marshall, Vice President of the United States, was the target of an assassination attempt by letter bomb. In 1947, several letter bombs were sent to President Harry Truman in the White House by Zionist terrorists, which fortunately were all intercepted.

On August 17 1982, Ruth First, a South African communist and  anti-apartheid activist was killed by a letter and parcel bomb mailed by the South African government to her home in Mozambique.  In April 2011 in the UK, Neil Lennon and two high profile fans of Celtic Football Club were sent parcel bombs. The two suspects in the case recently bagged a five year jail term each for the crime.

14 Warning Signs of A Letter and Parcel Bomb

So there you have it, the history of letter and parcel bombs. While not as frequently used as other forms of bombing by terrorists, it shouldn’t be overlooked. Especially not with the ever increasing rate of bombings in the country caused by the boko haram insurgency.

If you identify a letter or package as suspicious, don’t let anyone near it. Notify the police or security agent closest to you immediately, and leave the letter or package in an open area, such as a courtyard, where it is easily accessible to bomb squad personnel. Never submerge it in water!