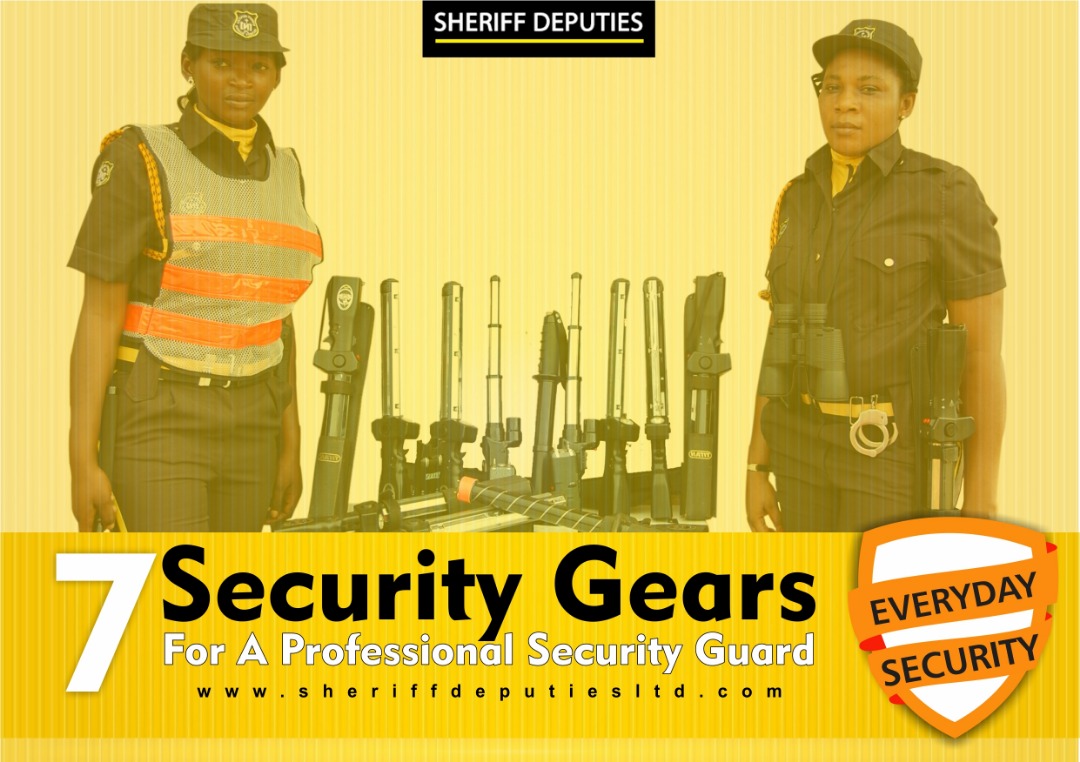 When you approach a security guard, what do you see? Do you know the reason why security guards are dressed the way you see them? Have you noticed their shinning boots and how smart they look in their dressing?

Some of us actually appreciate them but never get to say it to their faces, because we are not sure how to appreciate well-geared security guards. But hey! It’s what it is, security guards are not after your greetings (as a matter of fact, security are the ones that greet), they just want to keep you safe – that’s all that matters to any security guard.

A professional security guard is expected to be properly kitted for duty. These security gears are not only to protect the person or organization who is hiring the guards, but also themselves too.

In this article, we are going to be highlighting some of the most important gears of professional security guards.

Flashlight often called the torchlight in local parlance is one of the most common security gears used by guards. This lighting equipment comes in handy when guarding at night, and when guards have to look through darker lanes at day time.

The flashlight used by professional guards is not the same as the one used at homes and offices because they have the unique reach and are more solid – generally called the heavy-duty flashlights.

The flashlight is useful in a combat situation, yes! Many people might not know this, there are special training programs where these techniques are learnt. However, almost everyone can operate or carry a flashlight, so there is really no special training in this regard.

For a security guard on night duty, the flashlight is the most important equipment at his disposal.

The baton is also an important security equipment guards use to protect themselves, it is only used when under a threat or attack. Private security guards don’t carry live ammunition but you will always find the baton hanging by their belt.

You can also find the baton with the police; the baton is a weapon that is used to evade attacks in a subtle way, one might need to call armed police personnel were a more sophisticated weapon we used by criminals.

The sight of the baton alone can scare a petty thief because they know if the guard is to put it to use it can do some physical damage.

We give special training on the handling of the baton, as a matter of fact, it’s only after this training a guard can legally carry a baton. This baton comes in various shapes and sizes, we always advise people not to be at the receiving end of a baton, it not always a good experience.

Have you ever wondered why all the paramilitary bodies usually have their officers laced in boots? It is because of the nature of their jobs, a good pair of security guard boots is extremely important.

For most shifts, security guards are either walking around on a patrol or standing at their post. If they are on other kinds of footwear they could end of having sore legs and back pains.

We know how inconvenient it can be when guards are not wearing a quality boot and the effect it can have on their work and health. That is why we invest in quality pair of boots – one that lasts a lifetime.

If you have seen our officers, you would have noticed we use a pair of black boots. However, the colour is not definite, other security agencies use other boot colours, what matter most here is that the guard is wearing the recommended quality of boots.

All security guards are expected to be with a cell phone. It’s practically impossible to effect security if a security guard lacks adequate information.

The walkie-talkie and mobile phone are just the equipment for security guards for communication because it is impossible for someone to be physically present in two or more places at the same time.

Although much of the communication of a security officer may be through a walkie-talkie or other radio type device, a mobile phone will give you the ability to quickly call the proper authorities or fire safety department when required.

This is probably the unseen tool of the security guard, you hardly see security guard use them, it is usually kept in the pockets of their uniform. During routine patrol security guards jot down details of actions taken.

Notes taken during these routine patrols are used to write daily reports. Security officers are human as well, so they could miss an important detail if they don’t have a notepad and pen with them.

This is a professional way of carrying out a security task, and this is what you also get with international climes. So, when you are choosing your security guard to ensure they are equipped.

In Nigeria, private security guards are not authorized to use the real gun, but the stun gun can be used – some individual use it for self-defence too. The stun gun comes in various shape and sizes, but it equally effective in rendering a fleeing criminal incapacitated for a while.

If you have not seen a stun gun with a security guard, then you are yet to see a Sheriff deputies guard in his/her full kit. The stun gun is not a show-off weapon, you don’t want to allow it to be used on you.

The last thing a security officer wants to do is to wander around looking for his/her torchlight or baton when they need it most. Belts used by security guards usually come with extra pieces that slide or clip on so you can attach additional pieces of equipment on it.

The aforementioned are the basic security gears in you will find with a professional guard. Sheriff deputies are adjudged to be the most equipped security company in Nigeria that’s why our guards are able to carry out their duties effectively.

When you engage a security guard without him or her having the security gears to effectively do the job of keeping you and your property safe, then you are as good as unsafe.

Remember security guards are human beings too, they need to be assured of their personal safety before replicating the same to you – the exact reason we are committed to equipping our personnel with the latest security gears.

Send us your feedback using the comment section below, we love to hear from you.