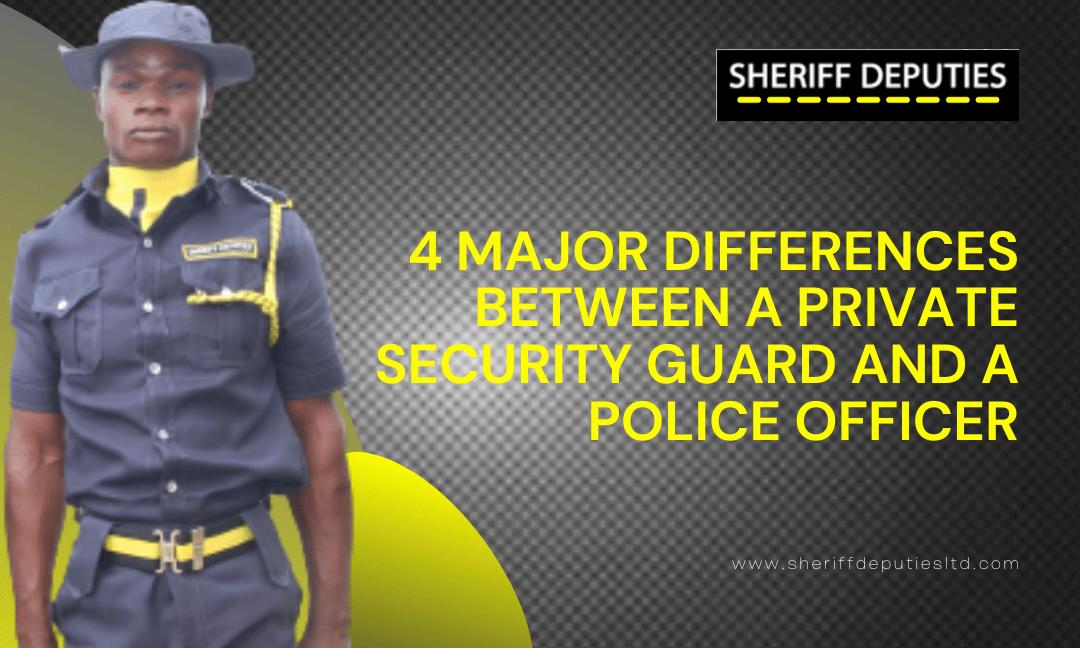 One word brings both the police and other security agencies together, and that word is Security. They provide safety of lives and other interests. So, whether you want to ascribe the title of which one of the greatest of all or you want to choose the most friendly or the most civil of all, we have taken an in-depth look at the police and private security guarding service providers and have found 4 uniqueness in the way both carry out their duties.

Upon reading this article, readers will be more informed and clearly distinguish the difference in the mentioned security bodies, the number 2 point here is a more obvious difference.

People who wear professional security guard uniforms have a more specific mission than those who wear local, state, or federal police badges.

Generally, police officers work for the police departments in cities, towns, and states that handle law enforcement duties. It depends on the agency whether its authority covers the whole state, a city, or a county. The public’s safety and welfare is their primary concern.

In private security, jurisdiction is limited to helping protect the property they are responsible for, such as a hospital facility or apartment complex. Providing personal security to individual clients ensures that their properties and their clients are protected wherever they go.

The police work for the country, and states they serve, and they have jurisdiction everywhere within those states.

The Power to Arrest

The Police are not allowed to prevent lawful arrests on private property by private entities. Lawful arrests include those made by officers acting in good faith. For example, dispatch may confirm an arrest is legal when the officers encounter a suspect with an outstanding warrant. A lot depends on whether there was a current warrant on the individual, but it is considered good faith when there wasn’t one.

Private security agencies have fewer arrest powers than police departments when looking at private security against The Police. There are several factors involved, including the training of the private entity and the jurisdiction in which it is based.

Most crimes are handled by The Police, if detaining a person for a crime requires the arrest or investigation of local law enforcement. Businesses that hire security personnel must also get approval from the Police that has jurisdiction there unless they hire off-duty police officers.

On private property, police officers are only allowed to arrest misdemeanors. There are several types of crimes that can result in criminal charges, including trespassing, and domestic violence.

The various legal requirements for the Police are governed by civil and criminal laws. Laws, politics, and government establishments control them. A police officer’s training is extensive.

In spite of the fact that private security and public safety training have some differences, they also share some similarities. Private security requires specific training, too, even though the rules are different.

The training you receive as a bodyguard for a celebrity or CEO can vary according to your position or job in private security.

Many people prefer private security over police because there are fewer restraints when it comes to private security. Due to the responsibilities involved, they are wary of offering armed services.

Security of the Job

In comparison to private security officers whose jobs are based on performance and contracts, The Police tend to have more job security. Some departments and agencies can fire police officers without cause for any reason, while others work under more political pressure.

In addition, some law enforcement agencies are now focusing on performance when raising salaries. Every agency works for a city, town, or state, which often has to change elected officials.

The following are some of the significant differences between public policing and private security. There is a possibility that you would prefer to work for a private company or individual because it suits your work style better. As a sworn officer, you can protect your community and serve as an agent of law enforcement. It doesn’t matter which path you choose, they both offer excellent career opportunities.