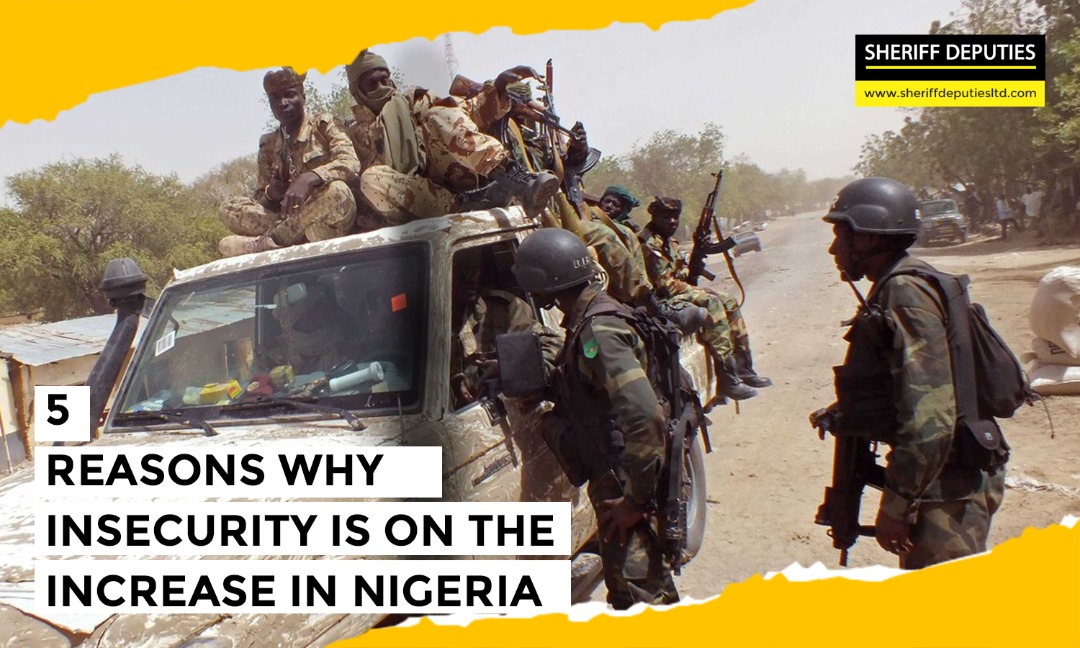 Nigeria is faced with several security challenges. Reports of terrorism, kidnapping, assassination and armed robbery have flooded the news channels. In what seems like an overwhelming situation for the Nigerian military, many believe that the Government is not doing enough to improve security.

In the same light, there has been high inflation of foodstuff with insecurity playing a major reason why such is the case because farmers in the Agric-producing state have had to stay away from their farms because of the fear of being kidnapped or killed by armed herdsmen.

5 Reasons Why Insecurity is on the increase in Nigeria

At Sheriff Deputies, we try to understand why a country like Nigeria who use to be celebrated for their unity in their diversity now seem to tend towards division. We are going to be looking at the reasons why there is so much insecurity in the country.

The highlights here are based on findings and security reports in the Nigerian dailies and news channels.

Since the Covid-19 pandemic, many businesses have had to reduce their wage bill. The pandemic impacted the global economy negatively, leading to massive loss of jobs.

Many entrepreneurs have now had to build for scratch, others were unable to secure a new job,  with others people who resort to drug peddling, stealing and other crimes blame it on the economic hardship.

The government should provide more bailout funds to businesses and financial institutions should also reduce interest on loans for small and medium scale businesses. Job opportunities should be created for employable youths and the unemployed.

Despite the effort of the Nigeria Customs to curb the illegal importation of arms into the country, criminal masterminds have consistently found ways to smuggle arms and disarm officers while on their duties. It is no longer news that hoodlums now capitalize on the vulnerabilities of some Police stations to steal weapons and burn down some.

These stolen and smuggled weapons are used to commit all kinds of crimes, ranging from kidnapping to stealing. More security officers should be assigned to the Nigerian border communities with a more aggressive search on suspected vehicles.

Having more checkpoints particularly at major seaports and highways can go a long way to frustrate the activities of gunrunners in the country.

In more technologically advanced countries, technologies like CCTV, facial recognition and biometric software have been used to locate the hideouts of criminals. However, much has not been said about the success of this kind of technology in Nigeria, particularly in the North where killings and banditry have become the order of the day. Despite the several biometric data collections Criminals are getting away with crimes and becoming untraceable in the eye of the public.

The deployment of the mentioned technologies is partly responsible for the high rate of arrest of criminals in many of these developed countries. It is believed that if these infrastructures are provided and well-managed criminals will find it hard to have a place to hide from the strong arm of the law.

Abuse of drugs will make users behave abnormally, people who are under the influence are known to be aggressive and forceful with their victims. Some of their victims live to tell their stories while other lose their life as a result.

Drug addiction is not good for anyone. In our line of work, we have had to restrain drug addicts and we under know how it can be to restrain. Addicts are known to do anything to get their pills, they can sell their prized asset just to get a dose of the drug they have been taking, and they can do ANYTHING to get settled.

Nigeria Drug Law Enforcement Agency must do more to curb the use of drugs by the younger population in the country. Places like hotels, schools, clubhouses and public places should be seldom searched and operators of such establishments are made to face the wraght of the law.

To whom much is given much is expected, people in places of authority must ensure that they carry out their duties without fear or sentiments. This will promote equity and fairness and in the long run reduce crime in Nigeria.

In the same vein, culprits must be prosecuted and jailed without an option of a fine if found guilty, we believe, will serve as a deterrent to others who want to commit the same crime.

At Sheriff Deputies we frown at every corrupt practice and officers found code of conduct is handed over to appropriate authorities. We have not to place for corrupt officers.

Stakeholders must come together and come up with a solution to the growing security concerns in the country for the benefit of all. While the executives should provide the political will, the judiciary should be equipped with resources for prosecuting offenders and the correctional facilities should be improved to meet international standards so that prisoners can come out a changed people.