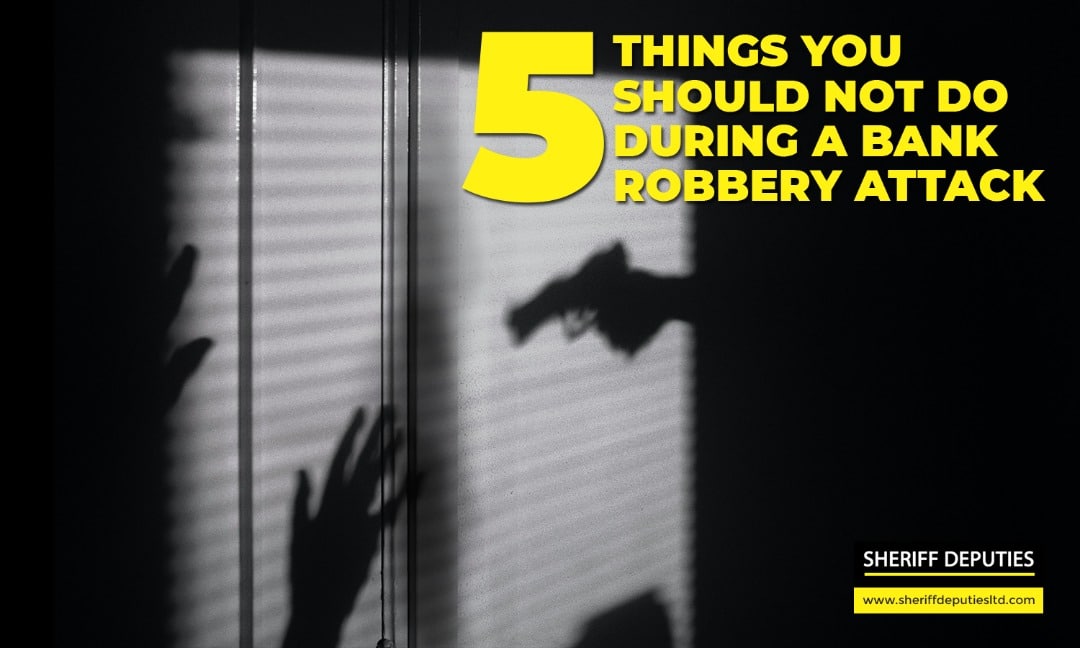 No reasonable banker prays for a day for his bank to be robbed, they would rather employ security guards, reinforce their walls and deploy every known anti-robbery solution. Thieves rarely announce to the bank the day they are coming to rob, but these criminals always find a way to outnumber and overpower their guards at the Banks.

In some cases security personnel will run for their dear lives because they are not as equipped to combat the firepower of the Armed Robbers, leaving customers and staff of the bank at the mercy of the thieves. Should we then say, banking should be forbidden because of the fear of attack? No! The Banks and other financial institutions remain critical to the economic development of our country Nigeria. A good solution would be for Banks to further strengthen security inside and within their bank premises.

5 Things You Should Not Do During a Bank Robbery Attack

In the event of a robbery attack, we have highlighted 5 things you should not do. Reports from Bank robbery cases have shown that Robbers are only interested in stealing money and other valuables in the bank, they are not interested in killing customers so long as they don’t get in their ways.

Robbers attack victims after taking hard drugs and get provoked to attack if they notice any form of resistance from their victims. If you are a witness of a Bank robbery assure the armed robbers you will cooperate if confronted and don’t act like your super action movie hero, it could jeopardize your safety.

If you are thinking of an element of surprise, please leave that thought until after the robbery, security of your life should be your priority, the owners of the bank have insured their bank. So, you should stay clear, do not resist!

2. Give careful consideration to the armed robber’s appearance

The Police might require you to give a physical description of the armed robbers while reporting. Basic information about their complexion, height, dress code hair colour and the language spoken.

Observe if there is something distinctive or usual about their appearance, for example, do they have tattoos, if you are outside the bank while robbery is in progress, take note of the plate number of the cars and the model of the car they are escaping with.

3. Pay attention to any conversations

This will facilitate the trailing and further arrest of the suspected robbers.

Typical of most bank robberies; robbers give instructions to their hostages on what and what not to do when a robbery is in progress. Don’t do anything without the approval of the Robbers because your actions are threats to them if the instruction is not coming from them.

Don’t test their patience, just do as you are told because in less than 60 minutes you will be alive to provide information about your experience to the Police to investigate and apprehend the robbers.

5. After the robbery, go immediately to a safe location, then report the crime

Your wellbeing should be your first concern. Ensure you have a sense of safety before you call the Police. After the robbery, avoid making calls where you have people and avoid going to an isolated area, move to an area with people and request that somebody stay with you while you hang on for security operatives to arrive at the crime scene.

Should you have reasons to remain at the crime scene, avoid touching anything.

A lot of security intelligence is will be required to curtail the scourge of armed robbery in Nigerian banks, a thorough background check must be done on bank staff and security guards posted to serve at financial institutions.

Authorities must leverage technology to assist with facial recognition and biometric software for easy tracking of a suspect which will lead to the eventual arrest of the members of the robbery gang.

In the event of a robbery please try to be as calm as you can and do as we have advised in today’s article. Your security is most important to us, and that’s is our promise to you. Sheriff Deputies is always Charged to Deliver.